Start a Wiki
Djed-Hapi dates to the Ptolemaic period (305-30 CE). It is believed that Djed-Hapi lived into his 50's, with an unknown cause of death. He is currently located at the University of Pennsylvania Museum of Archaeology and Anthropology, where he is part of the "Secrets and Science" gallery.

The mummy was wrapped in linen bands after the brain and organs were removed. Djed-Hapi was x-rayed in 1980, and again in 2016, which exhibited some details about his mummification. His head is cleanly detached from his body, and this is due to the mummification, not his death, as it seems intentional. This detachment is most likely attributed to the fact that during the Ptolelmaic period, brains of the deceased began to be removed from the base of the skull, rather than through the nose, which is why his naval cavity is intact. Despite some fraying of the external linen wrappings, Djed Hapi's body has been kept in rather good condition; all of his finger and toe bones are present, along with some preserved soft tissue. However, the only exception to this is that he has a large gap between the distal end of his shin bones and ankle bones, requiring his body to be handled carefully.

Djed-Hapi has recently undergone a conservation treatment in June 2016, as some linen wrappings were frayed or loose. The process consisted of the linen bands and pins being carefully removed, followed by humidifying and flattening the linens to get rid of any folds or creases. Lastly, the linen bands were wrapped around the body and adhered using Japanese tissue and a methylcellulose/water mixture, which acted like glue.

Djed-Hapi in the "Secrets and Science" gallery. 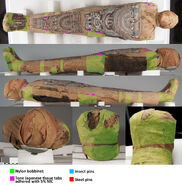 Results of conservation treatment.
Add a photo to this gallery

Retrieved from "https://mummipedia.fandom.com/wiki/Djed-Hapi?oldid=15593"
Community content is available under CC-BY-SA unless otherwise noted.